Cash, Krugler & Fredericks was interviewed by ABC and FOX affiliates about the firm’s efforts to get the Consumer Product Safety Commission (CPSC) to establish rules and issue a national recall for hazardous residential elevators. Recently, a five-year-old Huntsville girl was nearly crushed in a home elevator, similar to the one that entrapped and catastrophically injured CKF’s three-year-old client, Jacob Helvey. In the Helvey case, CKF built an exemplar elevator and performed testing with children of all ages to show how easy it is for children to become entrapped between the elevator doors. Andy Cash summarized the hazard in the ABC and FOX story, as follows: “In a nutshell, the space between the two doors is too big, and the kids get stuck, and whether they’re playing hide and go seek, or they’re young and just don’t realize it, it’s almost always catastrophic injury or death.” 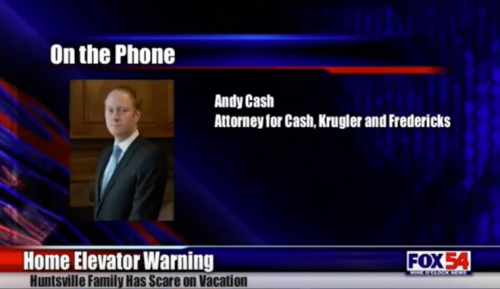