To the relief of a lot of parents (and maybe a few kids) summer vacation has ended. With the smell of fresh notebooks and pencils in the air, our children have gone back to class. The swimming pools will be all but abandoned soon and kids will make their way to recess, after-school and weekend sports.

Playing sports is an important part of childhood. Whether the sport of choice is baseball, soccer, hockey, football or soccer, lessons about cooperation and teamwork are woven into every practice and game. Sports also require and demand dedication, a value that serves us well in adulthood. But the same dedication that keeps your son late at school for extra laps after football practice can encourage kids to ignore injury.

What begins as a small injury may be ignored until it’s a big problem requiring a lot of treatment. In the past, athletes have been encouraged to “walk it off.” Today, we’re much better at encouraging our active children to pay attention, take a break and heal. No injury should be ignored and head injuries, especially, must be taken seriously.

My partners and I are well acquainted with head injuries and the lasting physical and emotional damage they can cause. We represent the victims of traumatic brain injury – individuals whose lives have significantly changed after severe head injury. Although we work on the extreme end of the spectrum, we’ve learned that even mild knocks to the head can be serious.

The head injury most often sustained by child and teenage athletes is called a concussion. Each year, thousands of school-age athletes are treated for concussions. Concussions are a type of traumatic brain injury. What used to be referred to as “having your bell rung” is now recognized as a serious injury and should be treated as such. Before your kids get back into their sport of choice, be sure that you, your children and their coaches know the signs of a concussion. 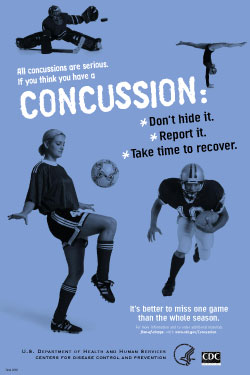 In the last few years, public awareness of dangerous hits to the head has skyrocketed. We recognize the link between traumatic brain injury and sports and the potentially devastating consequences. Players in the NFL are vocal and actively trying to change league policy to ensure greater protections for their players. The large amount of media attention on brain injury and the NFL may cause some to assume that only football players are at risk, but that’s not the case.

High school football players suffer more head injuries than college players, though it’s not clear why. So if your son will be strapping on a helmet and pads this year, make sure he understands the implications of head injury.

Don’t forget, though, that just about any sport comes with the risk of head injury. Hockey, soccer, wrestling, basketball, lacrosse and volleyball players get concussed every year. And don’t think that boys are the only ones getting hurt – girls get plenty of concussions, too.

The CDCs “Heads Up” materials illuminate the signs of concussion for coaches. Parents and players are encouraged to read up on concussions and take them seriously. The free guide is tailored to high school athletes, but it’s a good read regardless of how old your children are.

Talk to your student athletes about the seriousness of concussions. Pushing yourself in a sport can lead to great triumphs and the pride of playing your heart out. But athletes must have a limit. If not treated with the respect it demands, a head injury can bench an athlete permanently.