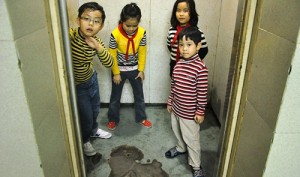 Children in an elevator in Vietnam point to holes in the floor. (Photo courtesy of Trui Tre News)

Residents of resettlement apartments in Vietnam expressed their anxiety and disappointment in faulty and inadequately maintained elevators. In elevators online on Tuoi Tre News, several residents admitted to living in fear of the building’s elevators.

The residents reported that elevators have malfunctioned, causing injuries, leaving people trapped inside, or they have even fallen down the shaft when the elevator doors opened without an elevator present. Still others report becoming trapped between the doors. Residents worry about safety when elevators vibrate and make creaking, cracking noises when in use. (Mechanics point to problems with ball bearings that create the sound.)

Elevators are expected to function for 20 years in the apartments in Vietnam, but due to low quality or inadequate maintenance, they only work for a few years.

In the Den Lu apartment buildings in Hanoi’s Hoang Mai district, some elevators have rusty floors, ceilings and widening holes. One resident reported that elevators have no battery for backup should the electricity go out and that residents have been trapped inside for over an hour during blackouts.

Dang Thuy Hang, 42, a resident of Den Lu, said, “When it rains heavily, water leaks into the lifts. The water will overflow when it stops at a certain floor. We local residents dare not use it for fear of electric shock.”

Le Thi Dan, the head of Den Lu’s residential quarter, said that the building’s four lifts only worked well during their first two years of operation. “Recently, no mechanics have come to maintain the machines,” she said. “A person may be quickly clamped by the doors of a lift because it has a technical problem and runs too fast.”

These problems aren’t unique to the Den Lu residential buildings. Giang Van Phuc, 68, a resident in a Nhan Chinh resettlement apartment building, worries for his ill wife when elevators stop working. His wife is unable to use the stairs and has been stranded at home when the elevator isn’t running. Residents at Phuc’s apartment building have boycotted the elevators since a guard died in an elevator accident in June 2014.

The Hanoi Housing Management and Development Company is responsible for managing buildings for resettlement, including 204 elevators in the capital city. Thirty-three elevators are left unused. The defect that caused the June 2014 death of the guard was reported to the HHMDC, but was ignored. Nguyen Hong Thai, vice director of ThyssenKrupp Vietnam, said that each elevator needs technical maintenance every two months.

An official at the Hanoi Housing Management Company said the firm’s hands are tied. According to the official, repair and maintenance of the elevators must first be approved, then financed, by the People’s Committee of Hanoi before any action can be taken.

We hope that authorities in Vietnam will act soon. The residents in Hanoi deserve safe elevators and peace of mind.