When tragedy strikes, we’re sometimes forced to quickly transition from shock to action. Communities and families set about mending what can be mended and reconstructing their lives in new circumstances. Personal misfortune often leads to a fierce resolve to create change – we don’t want others to suffer as we have.

For Brandi and Michael Helvey, their son’s life-altering residential elevator accident was the beginning of their advocacy. Jacob Helvey was an inquisitive, increasingly independent toddler.

A flaw in the design of the home’s residential elevator left enough space for the young boy to get stuck between the inner and outer doors. In an instant, Jacob was grievously injured. He suffered catastrophic and permanent brain damage and will require around the clock care for the rest of his life.

The flaw in the Helvey’s residential elevator is not unique. In Georgia alone, there are over 900 elevators in use with the same dangerous design. The Helveys decided to share their story. They never want another child or family to suffer as they did.

With the help of a determined investigative reporter, Dana Fowle, they were able to share their story with thousands of Georgians. The five-part series that aired on FOX-5 got the attention of Georgia Insurance Commissioner Ralph Hudgens.

Thanks to the Helvey’s story and Dana’s piece, the state sent an urgent letter warning Georgians with elevators in their homes of the danger posed to children. Changes to our state’s safety code followed.

At its best, journalism serves the public interest. By amplifying the voices of everyday people with stories that need to be told, the media can set the stage for change.

Our society is indebted to journalists who live by the highest standards of their profession and seek to highlight injustice and inequality. Dana Fowle’s series earned her a much-deserved Emmy. She gave it to the Helveys. 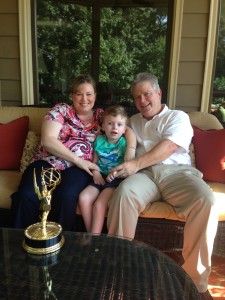 Brandi and Mike Helvey with their son Jacob and the Emmy.

Sadly, the dangers still exist. Since Jacob’s accident, other children have been injured. Moving past their own tragedy, the Helveys are still determined to share their story. Together, they work to make changes to protect children like their son.

Our firm notified Dana Fowle of Fox-5 of the danger of certain home elevators, like the one that severely Jacob Helvey on Christmas Eve, 2010. She produced a five-part video series on elevator safety and won an Emmy for her reporting. She gave it to the Helveys.