Our first instinct with a new baby is to bundle them up and keep them close and warm. But for babies that don’t get enough oxygen during birth, a chilly incubator is the best option.

One to two infants in 1,000 live births are affected by a lack of oxygen in the brain around the time of birth. Luckily, less than one of these three infants develops brain damage. Twenty percent of infants that have hypoxic brain damage die. The babies that survive have a 50 percent risk of cerebral palsy or related injuries that may permanently cause a significant handicap.

When babies are deprived of oxygen at birth (or suffer some other brain trauma) some brain cells start to die during the injury and for days afterwards, after the infant appears to recover. The inspiration behind hypothermia treatment, which helps the brain for reasons that still aren’t fully understood, came in part from the surprisingly good outcomes of people who nearly drowned in cold water. For babies that are undergo “head cooling,” the main goal is minimization of further brain damage. 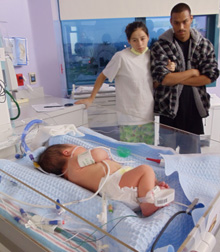 Parents watch over their baby being treated with hypothermia. (Photo courtesy of ChildrensCentralCal.org)

The Process of Hypothermia Treatment

Hypothermia treatment generally lasts for 72 hours. An injured baby’s body temperature is lowered to 92.3 degrees as they lay on a quilted blanket with cold liquid between the layers. Since the cold could lead to shivering (which could raise body temperature) babies are given a sedative to minimize the shivers. Medical staff monitor brain activity with electroencephalograms (EEGs) and watch for abnormal brain activity or possible seizures.

When the chilly 72 hours are complete, the baby is slowly warmed over a six-hour period. Warming is considered a high-risk period, so medical staff watch carefully for abnormal activity that could indicate a seizure. If the baby’s temperature goes up (about half a degree per hour) without any trouble, and their metabolism gets back to normal after the drugs they’ve been given leave their system, they’re free to go home. Some babies may be given an MRI to look at brain structure and check for injury.

Thanks to improved technology, premature and other at-risk babies are more likely than ever to survive. But rates of brain damage and long-term brain damage are unchanged from 20 years ago. We hope that new techniques, like hypothermia treatment, will change that.