Privacy Not a Concern with Black Boxes in Cars

When most of us hear the words “black box” we think about flights that ended in tragedy and a downed airplane. On an airplane, a black box is actually two separate components: a cockpit voice recorder and a flight data recorder. Unless the worst happens, the black box (which is actually bright orange) does nothing. Its only purpose is to help investigators piece together the final moments of a flight and understand what happened to cause the crash.

Black boxes aren’t only used in airplanes; the National Highway Traffic Safety Administration now requires car manufacturers to install black boxes in all new vehicles. It’s a move that’s been in the works for several years but only went into effect on September 1, 2014.

My partners and I represent clients whose lives have changed after injuries sustained in car accidents. We followed black box legislation with interest. We support the use of black boxes in cars and in September 2013, I wrote an opinion piece for the Atlanta Journal Constitution about black boxes.

Concerns about privacy have resurfaced in the collective American psyche. The revelations of large-scale data collection by the government and by corporations inspire distrust and make us wary of yet another method of data collection. My partners and I have strong concerns about privacy and the storing of data by private corporations and the government. But we don’t believe that black boxes in cars should be swept into such privacy concerns.

Black boxes (officially known as event data recorders, or EDRs) can track a variety of information, from when the driver hit the brakes or the gas, their speed and even if they were wearing their seatbelt. Who has access to that information? So far, only the owner of the vehicle. As of now, police, insurers and automakers can only retrieve the data from your black box with your consent or, potentially, a court order.

Drivers should note that black boxes in vehicles today do not continuously monitor your every move. Similar to their airplane counterparts, black boxes exist to help us understand what happened when an accident occurred.

The black box will store only 30 seconds of data after a recordable event. Surprising as it may sound, that 30 seconds is all you need to get a snapshot of the vehicle’s actions before a wreck. Your event data is not uploaded to some cloud-based Internet database. The data is stored only on your black box. 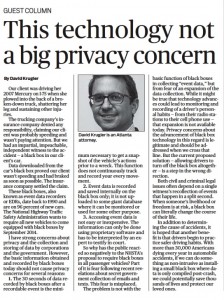 The data that is recorded on the black box is not easy or inexpensive to access. In other words, no common layman can steal your data. You can only get information using proprietary software, and then that information must be interpreted by an expert.

The real concern about “black boxes” in cars really isn’t about Event Data Recorders. Instead, the concern is that manufacturers or others may attempt to gain access to additional information, from what you are listening to on the radio to where you travel. There is also concern about maintaining the privacy of such information. While those are legitimate concerns that deserve thoughtful debate, it is important that Event Data Recorders, and the important job they play, don’t get swept away with those debates.

Our memories are faulty, but civil and criminal legal issues often depend on a single witness’s recollection of events. Car crashes happen in a flash. Someone’s livelihood or freedom may hinge on the memory of a bystander. Black boxes provide a dispassionate, irrefutable snapshot of the moments before an accident. The information they hold can change the course of a defendant’s life.

Finally, I want to mention the 30,000 Americans that die in car accidents every year. The black boxes are not noticeable, but the hope is that drivers will remember their presence. Will knowing that a record of our irresponsible driving practices will exist if an accident occurs inspire us to pay more attention to the road? If the presence of a black box makes us drive more carefully, thousands of lives may be saved every year.