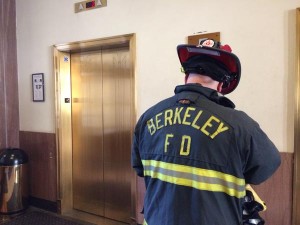 An unexpected power outage in Berkeley, California and the surrounding area left 38,000 people in the city without power recently. Though the outage was relatively short (people were without power for a little over an hour) it was a busy time for first responders.

While the power was out, there were five separate elevator rescues by Berkeley firefighters. One rescue occurred at City Hall, according to a report on Twitter.

We’re glad the elevator rescues were successful and no one was hurt. An unexpected elevator stop can be frightening, but there’s no reason to panic. Remember, help isn’t far away, so stay calm, follow a few simple rules and you’ll be fine.

Steps to Take When Stuck in an Elevator

If you determine that the elevator is not responding the best thing to do with attempt to contact help and wait it out. Efforts to escape may actually put you in more danger.