Defect in Home Led to Tragic Fire and Burn Injuries

When my partners and I opened the doors of Cash, Krugler & Fredericks, we knew we didn’t want to be a volume firm. We chose to keep our caseload small and do our utmost to represent the clients that truly needed our services.

Walking this path, we’ve met clients facing loss we couldn’t have imagined, in the midst of putting the pieces of their lives back together after shocking, unexpected events. We consider it an honor to represent the clients we do. It is our privilege to fight for them and our hope that in doing so we can prevent further tragedy.

All three of us were deeply saddened by the circumstances that led Alexis Goines and her four children to our door. One year ago, the Goines family nearly lost their lives in their rented home. On a peaceful night in October, Alexis watched over Kaniya, Zaylien, Zavien and Destiny as they brushed their teeth, put on pajamas and headed off to sleep.

All the children were asleep in their own bedrooms except for Destiny, the youngest child, who fell asleep in her mother’s room when Alexis turned out the lights, ready for bed herself. Suddenly, a massive explosion rocked the house.

The blast was followed by a fireball that ripped through the home, setting it afire. Panicked and desperate to get her children, Alexis grabbed the still sleeping Destiny and frantically ran through the house to save her other children.

A neighbor heard the blast that blew part of the Goines’ roof off and ran to help them. The neighbor helped Zavien escape the flames engulfing the home, then directed Alexis, Destiny in tow, out of the house while Zaylien and Kaniya found their way to safety. The family stood and watched as their home burned. 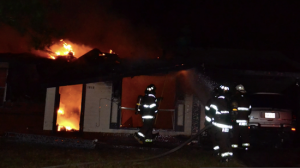 Shown above: Firefighters working to put out the blaze.

Their attention was redirected when Destiny began to scream. Injured in the fire, Destiny’s skin was peeling from her small body. When ambulances arrived, they rushed Alexis, Destiny, Kaniya and Zalien to the Augusta Burn Center.

As the handyman worked, he noticed two gas valves. He claims he turned both off while working. When he was done, he turned both gas valves back on. But while one gas valve led to the water heater, the other led to an uncapped gas line that had previously serviced a stove. Gas flowed into a vent, rising into the attic. In the night, a spark ignited the gas and caused the explosion and fire.

The superfluous gas line should have been capped. As the Goines family can attest, leaving it uncapped was irresponsible and incredibly dangerous. It was the kind of danger that should have been uncovered in any home inspection. 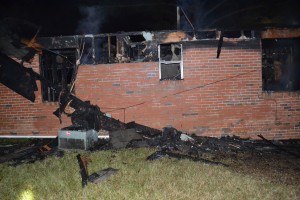 Shown above: The Goines family’s house after the fire.

The Goines leased their home through the Department of Housing and Urban Development Section Eight program. The Housing Authority of Columbus was responsible for carrying out the program in Columbus, Georgia. Yet the danger was missed time and again, unbeknownst to the Goines.

My partners and I are working on behalf of the Goines family. In June 2014, the family’s medical bills alone amounted to close to $3,000,000.

Whether you own or rent a home, regular inspections are essential. When hiring an inspector, be thorough. Here are a few guidelines for finding an inspector you can trust.

● Conduct an interview. Ask them if they are members of a professional inspection organization.
● Ask about their experience. Whether your home is very old or quite new, find an inspector who knows about homes like yours.
● Ask how long their inspections take. A good home inspection takes about three or four hours, longer for a larger, older or fixer-upper home. Anyone that promises to be out “in an hour or two” isn’t doing their job thoroughly.
● Ask if you can attend the inspection. Your inspector should not have a problem with this. A great inspector will take time to explain everything they’re looking for to you while they go along.
● Make sure they plan to inspect every last inch of your home. Basements and attics aren’t afterthoughts in a home inspection.