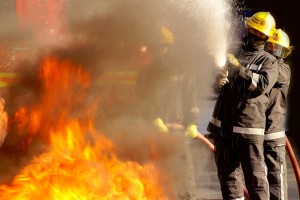 Our firm represented a family who suffered catastrophic injuries when their rental home exploded and burned down.

One evening, when the family of five was getting ready for bed, an explosion sent a fireball through the home and engulfed the home in flames. While fortunate to survive, the mother and three of her daughters suffered terrible second and third degree burns requiring multiple surgical skin grafts. The youngest daughter, a 6-year-old, was so badly burned that she had to spend six weeks in the ICU and two months in the hospital. The mother and 6-year-old continue to face a future with more surgeries to treat the burns. There is no doubt that life of each family member has been permanently changed.

The unlicensed plumber testified that he turned both gas valves off, replaced the water heater and then turned both gas lines back on. The problem was that one of the gas valves led to an uncapped gas line that was no longer in use. The uncapped line vented to the attic. From the time that the unlicensed plumber finished changing the water heater to the time of the explosion, gas flowed into the attic. Eventually, around 11 P.M. that evening, a spark of some kind ignited the gas building up in the attic and the results were catastrophic.

Like many catastrophic injury cases, injuries result when somebody fails to do their job correctly. In this case, there were multiple failures. First, the local Housing Authority was required to provide decent, safe and sanitary housing for low-income families by conducting routine inspections of all homes. The Housing Authority had a duty to insure that all gas lines running through the house were in safe working order. Where the gas lines were no longer in use, they were supposed to be properly capped or removed altogether. Despite confirming in inspection reports that the gas lines were safe, they clearly were not.

The cause of the fire was not immediately evident. However, Cash Krugler Fredericks with a team of expert engineers were able to determine how the fire took place and successfully pursued claims against the Housing Authority, the homeowner, the property manager, and the appliance store that originally replaced the gas stove with an electric stove, leaving the line uncapped.

No amount of money adequately compensates our clients for what they lost, the pain and suffering they endured and continue to endure. The money does not erase the significant emotional and physical scars they suffered and will carry with them the rest of their lives. However, with our involvement and our efforts, a multi-million dollar settlement was reached and we made sure that those at fault paid every dollar available.