Earlier this month, Elizabeth “Lizzy” Scotland, 22, filed suit against the Otis Elevator Company and the owner of the Boston Red Sox. Scotland is suing over severe injuries she sustained during an elevator accident that occurred in May 2014.

Lizzy was celebrating her graduation from Boston University and an impending job at PricewaterhouseCoopers when disaster struck in Fenway Park. 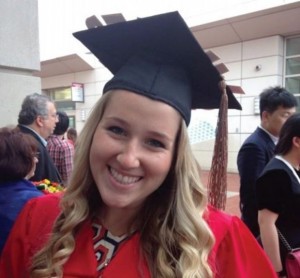 Lizzy Scotland was seriously injured in an elevator accident in Fenway Park.

The bright young woman and her family were watching a Red Sox game in May 2014, gathered in an area near an elevator. According to the lawsuit, Lizzy had “casual contact” with the door, which swung backwards to the exposed shaft.

Lizzy plummeted two stories and landed on the top of an elevator car 25 feet below. She was unresponsive when firefighters arrived at the scene. She suffered a traumatic brain injury, spinal injuries and facial fractures, as well as dental damage.

Officials are still unsure why the elevator door opened.

A elevator injury video obtained by WBZ in Boston shows the door of the 4th floor elevator swinging open at just a touch. State investigators concluded that the door was in working order the day of the accident but has a long history of problems. It had been broken and repaired many times.

We wish her all the best in her continuing recovery.