Traumatic Brain Injuries in Military Turn Spotlight on its Effects 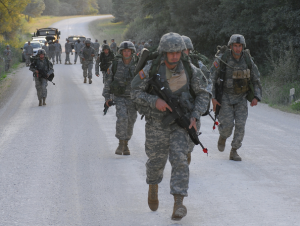 Unlike the vast majority of physical wounds, traumatic brain injury is invisible. But as we have seen through our work representing people with brain injury, the effects of TBI can be just as damaging and challenging to learn to live with. TBI plagues our servicemen and women, affecting thousands of retired and active duty soldiers.

Traumatic brain injury is the signature injury of the Iraq and Afghanistan wars. The effect the injury had on returning soldiers increased the visibility of TBI in both the military and in civilian life.

In 2013, the U.S. Department of Veterans Affairs (VA) expanded benefits to veterans with conditions caused or exacerbated by traumatic brain injuries. It was a move applauded by many veterans’ groups, and criticized by others for not expanding benefits more. Why?

The VA’s new regulations extend benefits only to those who can prove they suffered moderate and severe brain injury. (A 2008 study conducted by the Institute of Medicine found that evidence linking mild brain injury to the diseases we will list in a moment were “limited or suggestive.”)

If a veteran suffers unprovoked seizures, depression, hormone deficiency diseases related to the hypothalamus, Parkinsonism and certain dementias and can prove they suffered a service-related brain injury, their cases are (potentially) sped up and simplified.

Once a service member provides sufficient evidence of their brain injury, the VA will accept that any of the diseases listed above were caused by their brain injury. They are then entitled to additional compensation and health care.

TBI is linked in the public mind with IEDs and the harsh reality of war in the Middle East, but the majority of TBIs in the military occur during training accidents, playing sports and vehicle crashes at home. Eight of 10 TBIs in the military are considered mild – the IOM defines mild as involving a loss of consciousness or memory for less than 30 minutes.

The Department of Defense takes the high incidence of TBI seriously. Initially, the military turned to the civilian medical community to learn more, reaching out in particular to the neurologist and neurosurgeon advisors to professional sports teams. Today, the DOD is leading the way in research, in part by taking a “team approach” and encouraging specialists from different areas to collaborate with one another.

In 2012, President Obama signed an executive order mandating a National Research Action Plan (NRAP) with the goal of improving access to mental health services for veterans, current service members and military families. Thanks to the mandate set forth by the NRAP, the DOD and the Centers for Disease Control joined together to tackle mild traumatic brain injuries, what we usually call concussions.

Last month, the DOD announced that the Defense Advanced Research Projects Agency is developing a wireless brain prosthesis to combat a common side effect of TBI, memory loss.

“These neuroprosthetics will be designed to bridge the gaps in the injured brain to help restore that memory function,” said Dr. Justin Sanchez, DARPA Restoring Active Memory Program manager. “Our vision is to develop neuroprosthetics for memory recovery in patients living with brain injury and dysfunction.” You can read more about the exciting research here.

Here on the Cash, Krugler & Fredericks blog, we’ve written about one partnership between the DOD and Abbott Laboratories. That multiyear partnership will hopefully create a portable blood test that can be used in the field to test for brain injury.

Definitive diagnostic tests would be a major boon to caring for people with suspected brain injuries. The symptoms of TBI are vague and unspecific, leaving people vulnerable to missed diagnosis. As we’ve discussed before on our blog, a second impact on the brain before it’s entirely healed from even a minor TBI can be deadly.

While the military is (rightly) focused on improving treatment and the lives of our soldiers, civilians also receive a benefit. We’re still learning a great deal about TBI, including how to diagnose a brain injury quickly and effectively and what the long-term effects are on our physical and mental health. The dedicated research, both theoretical and practical by the DOD, is improving care and advancing knowledge of TBI for civilians around the world.